The concluding session of our three-part online event series took a closer look at climate projects in the capital of Georgia, in Tbilisi, and in Hermosillo, Mexico. Having presented Germany’s multi-level support structure for local climate action, i.e. the National Climate Initiative and its support programmes, in the previous online event, the third session shed light on how Collaborative Climate Action works in practice in other parts of the world.

In his opening remarks, Hermann Amecke from the German Ministry for the Environment, Nature Conservation, Building and Nuclear Safety, set the scene by acknowledging the critical role of cities in tackling both the COVID-19 and the climate crisis. Although this frontline role of cities is increasingly being recognized, Mr Amecke also pointed to the fact that the investment gap for climate-friendly urban infrastructure still exceeds US$ 1 trillion per year globally.

However, the cases from Georgia and Mexico are good examples for how national climate projects have been implemented at the city level.

As the capital and largest municipality, Tbilisi is widely considered as a role model for other cities and towns in Georgia. Giga Gigashvili, Head of the Municipal Municipal Service for Environmental Protection at the Tbilisi City Hall, spoke about how the city implemented a national forest regeneration initiative by starting with data collection, building up a local inventory and developing implementation standards. Since 2018, the project has planted close to 75.000 trees in urban areas and, for 2021, it is set to restore another 12 ha of forest close to the city.

While the Forest Regeneration Plan was started by the national government, it was the city itself that initiated a number of other urban greening projects, including nine park enhancements and rehabilitations as well as green traffic islands in 60 locations.

Guadalupe Peñúñuri, General Director of the Municipal Institute for Planning in Hermosillo began by outlining how the municipality implemented a national initiative for a new urban mobility that is “healthy, safe, sustainable, and in solidarity”. A citizen’s poll revealed that the main reasons for the city’s small percentage of bike usage (3% compared to 48% of cars) are not related to the climatic conditions but to the lack of safe and adequate bike infrastructure (the Mexican weather was only cited as number five on that list).

Hermosillo decided to adapt the national initiative which, however, was rather a “call for action” than a strategic implementation plan. In order to extend the share of zero-carbon mobility, the city changed its legislation and made a new standard model for streets mandatory, which allocates spaces to pedestrians, bicycles, public transport and cars as well as urban greenery.

On top of that, Ms Peñúñuri visualized strikingly not only how the city took the corona pandemic as an opportunity to accelerate the transformation to climate-friendly cities, but also how beneficial an integrated planning process is for the liveability of cities along various dimensions.

Constanze Böning, Project Director of Climate Policy Meets Urban Development at GIZ closed by thanking the speakers for sharing insights on the steps undertaken in their projects, that can certainly provide a blueprint for other climate projects and other cities. The stories told had also shown that local governments, on the one hand, are important innovators and function as laboratories for bottom-up recovery strategies while, on the other hand, national governments remain key for effective implementation at scale. Therefore, smooth cooperation between the levels is crucial. 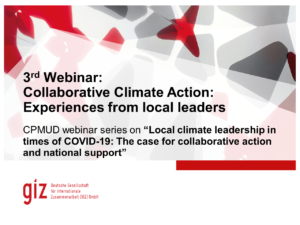