On this page you will find additional information to topics addressed in the report. The PDF version contains links which lead to the information presented below. 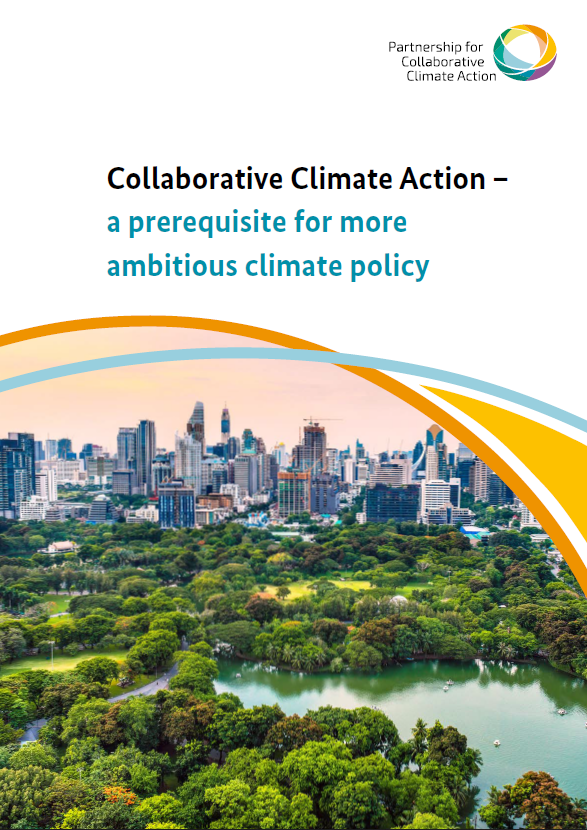 Encouraged and strengthened by the United Nations Conference on Environment and Development (UNCED) in Rio de Janeiro in June 1992 and the foundation of ICLEI Local Governments for Sustainability (September 1990), municipalities and regions have developed their international engagement since the early 1990s. Cities had mainly interacted bilaterally across borders, but since the aforementioned milestones cities and regions increasingly form networks addressing sustainability issues and accompanying UN processes.

In implementing the UNCED-agreements, the UN Department for Economic and Social Affairs has defined nine so-called “major groups”, one of them for municipalities. These actions led to a culture of greater transparency and openness within the UN. In new dialogue processes the expertise of interest groups drew increasing attention. Thereby, local, and later regional, governments became accepted as actors within UN processes.

Over the years, local government representatives have renewed and partly realised their demand to not only be viewed as interest groups next to e.g. the Youth or business, but to be accepted as part of the government system. Having been denoted as “Cities and local authorities”, the term “subnational governments” is increasingly used, also as reference to the strengthened subnational level in the sustainability debate.

In the first ten years following the Rio Conference, local processes for determining sustainability goals and action plans were in the center of attention. This debate, taking place in far more than 10 thousand cities and municipalities, was the main subnational contribution to the UN Agenda 21. The inclusion of citizens and interest groups in designing local strategies for ecologic, economic and social development remains a core principle of any sustainability strategy.

Since its inception, municipalities and regions play an active role. See also “City Climate Diplomacy” below.

To preserve biological diversity, a worldwide process began with the UN Convention on Biological Diversity, put into effect in Rio 1992. While the institutionalised participation of cities only became visible during the first mayors’ summit on biodiversity, the necessity of municipal engagement in matters of biodiversity had been part of CBD-decisions earlier than that. A “Global Partnership on Cities and Biodiversity” had, with support from the CBD secretariat, laid the ground for such engagement through a year-long cooperation between especially ambitious cities, regions and states (an example of multi-level cooperation). At the 2008 CBD Conference of the Parties 9 in Bonn, Germany, a decision had encouraged national states to include subnational actors in their national plans on biodiversity (CBD).

Based on this decision the 2010 COP10 in Nagoya, Japan adopted two more far-reacing decisions, the Aichi Biodiversity Targets and the “Action Plan”.

In the „Plan of Action on Subnational Governments, Cities and Other Local Authorities for Biodiversity (2011-2020)” the Parties and other governments are encouraged to act:

Meanwhile cities and regions organise themselves and maintain the creation of Local Biodiversity Strategies and Action Plans (LBSAPs), which translate national goals to the local level and where own targets and strategies are defined. Ideally, the Parties would then include the local and regional goals activities and results in their National Biodiversity Strategies and Action Plans (NBSAPs) reports and thereby enrich their national planning.

The SDGs address countries from both the global North and South and thereby develop a particular force. Departing from the Millenium Development Goals (MDGs, adopted in 2000), which define goals for developing countries for 2015, the SDGs explicitly obliges developed countries to follow goals for sustainable development. This context explains the larger thematic breadth of the SDGs compared to the MDGs.

A concerted action from all internationally organised city and region networks and smart process management by the governments preparing the SDGs has led to the inclusion of local and regional positions in the consultation process. The Sustainable Development Goal 11 (Make cities and human settlements inclusive, safe, resilient and sustainable) expresses the significance of the subnational government level and some of the themes for which it is responsible.

International Strategy for Disaster Reduction (ISDR) and the Sendai Framework

The Sendai Framework for Disaster Risk Reduction 2015-2030 proposes concrete actions for protection from disasters to the UN member states. A translation to the local level presents “ten essentials for making cities resilient” (UNISDR), an example for the necessity of clearly addressing subnational aspects in international agreements.

From the perspective of municipalities and regions, the different UN-processes are viewed as a whole. Often, their representatives are more informed on the inclusion of the subnational level than national government representatives. Although organised in various networks (e.g. ICLEI, C40, UCLG and the Global Covenant of Mayors for Climate and Energy), subnational representatives usually work together well in communicating joint positions towards national states and the United Nations. Overall, cities and regions act as catalysts for worldwide sustainability processes, especially because they are able to present concrete targets, examples and local successes.

Beginning in the early 1990s, the first international initiatives on “Local Climate Action”, especially via ICLEI’s Cities for Climate Protection Campaign (CCP) came into existence. Groups of cities from different countries and continents worked together to jointly create greenhouse gas inventories and developed action plans for emissions reductions. Cities were even present at the first UN climate change conference in 1995 in Berlin, Germany with an event, the “Second Municipal Leaders Summit on Climate Change” under the patronage of Angela Merkel in her former role as German Minister for the Environment.

Since then, municipalities and regions closely monitor and participate in the UN climate process. They are present with delegations of mayors, host accompanying events, speak to various UN bodies and use the international stage to encourage climate action at home.

High-level representatives of cities and regions do not view themselves as “NGO” but rather explain why they are in fact part of the governance system. At the UN climate change conference COP16 in 2010, this was conceptualised as “governmental stakeholder”. The Paris Agreement speaks to “all levels of government“, which can be seen as recognition of subnational actors. Municipalities and regions are now regularly heard in the UN climate process and required as implementing partners, for example in the recent report on “Sustainable Cities and Climate Finance” of the UNFCCC Standing Committee on Finance.

At the inception of the UN climate change conferences in 1995, the “Local Governments and Municipal Authorities (LGMA) Constituency” had been created as a connector between municipalities and the UN Climate Change Secretariat UNFCCC. ICLEI Local Governments for Sustainability takes the role as focal point and thereby supports the collaboration between a growing number of organisations making up the LGMA Constituency.

Examples of subnational initiatives for the improved cooperation with national governments in UN processes include:

As in many other phases of the UN climate negotiations, cities and regions are now supporting the preparation of COP26 in Glasgow, Scotland in 2021 with the goal of strengthening multi-level action in climate action.