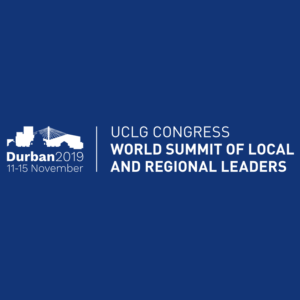 The United Cities and Local Governments (UCLG) World Summit is the largest gathering of mayors, councilors, presidents of local associations, and local and regional practitioners, from around the world. The triennial gathering is designed to bring the world organization’s constituencies together to review and build on a legacy of commitments and advance the UCLG’s role in shaping the multilateral agenda from a local and regional perspective.

The main outcomes of the 2019 Summit were the Durban Political Declaration, titled “Envisioning the Future of Our Renewed International Municipal Movement,” and, for the first time at a UCLG Congress, a compendium of integrated policy recommendations resulting from a six-month consultation process with diverse stakeholders. Titled, “Outcome Document of the World Assembly of Local and Regional Governments,” the compendium also offered bottom-up continental and region-specific priorities. During its plenary session on Friday, the UCLG World Council also appointed a new presidency.