The Climate Group and CDP

States and Regions are leading the way, but they are vulnerable too

The Climate Group’s annual “Global States and Regions – Annual Disclosure Report 2020” highlights the challenges and progress of 121 states and regions across all continents which disclosed their issues and solutions regarding climate change mitigation to the CDP.

The report further introduces the aggerated statistics of the states and regions that have disclosed their climate action and vulnerabilities. 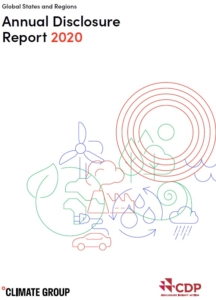