The Climate Policy Meets Urban Development (CPMUD) online event series kicked off with its first event on “The German multi-level climate support architecture“. For this session, the GIZ project invited two expert practitioners to explain to an international audience the institutional set-up of the German National Climate Initiative (NCI) and its mechanisms to foster local climate projects.

A broker between the national and municipal level – the SK:KK

Dr. Andrea Fischer-Hotzel, who is a Research Fellow at the German Institute for Local Affairs (Difu), spoke about the role of the Service and Competence Center for Municipal Climate Mitigation (SK:KK) within the German multi-level governance system.

As the main challenge for municipalities is to mobilise finance for local climate policy measures, the SK:KK is tasked to assist local institutions in accessing the funding opportunities existant. The NCI, Germany’s biggest government-provided climate financing instrument, supports local governments by providing between 20 and 65 percent (and up to 90 percent for financially weaker municipalities) of the costs of a wide range of climate protection measures.

SK:KK acts as a focal point with regard to questions on climate support programmes, providing information and advice as well as capacity building through trainings and networking. To allow for a tailored approach, SK:KK closely collaborates with the three levels of government, for instance, by organising regular exchanges between the municipal and the federal level and by keeping close contact with government and energy agencies at the regional level ( through ‘Länder officers’).

Regine Wosnitza, project leader of an NCI project in Berlin, shared her experience from implementing the project called “Kiez (er)Fahren” in the district of Schöneberg Nord. Compared to the average of the “green” city of Berlin (17 m²), this district offers its residents only 2,5 m² of green space per person. To allow for more publicly accessible space and to transform neighbourhoods into climate-neutral, multimodal and liveable city quarters, “Kiez (er)Fahren” pilots several measures that lead, for instance, to a reduced number of privately-owned cars.

During the so-called “Umparkerkampagne” campaign), 30 individuals willing to give up their cars for one month received vouchers for public transport and car sharing services. As a first success, after a couple of weeks some participants decided to give up their cars permanently.  The project has also shown that the temporary exclusion of cars from certain streets allows to test new forms of urban land use.

Interestingly, more than ever, the COVID-19-crisis led to a better understanding and visualisation of new alternatives to use public spaces. One consequence of the crisis, streets worldwide saw significantly fewer cars during the first months of 2020. Less traffic, less noise, and more space on roads has been a paradigm shift for many Berliners and may contribute to a permanent change of mind and in behaviour.

The second event of this series discusses “How to mainstream climate projects into cities’ governance frameworks”. 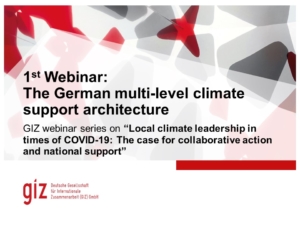