The two-part study by the Data-Driven EnviroLab and the NewClimate Institute analyses the net-zero targets of subnational governments and businesses. While the first part maps the existing targets as of now, the second part, entitled “Navigating the nuances of net-zero targets”, goes into the details and is to provide local actors with the tools to assess their ambitions and associated impacts. 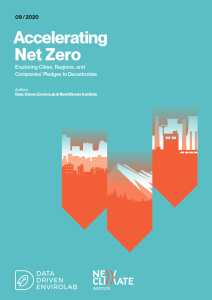