The updated version of the Leipzig Charter is the central document for integrated urban development in Europe and is strong on demanding self-confident action from cities and emphasising multi-level collaboration. The New Leipzig Charter (NLC) also paints a clear vision of a green and climate-friendly city.

On November 30th, the EU ministers responsible for urban matters have adopted a revised version of the Leipzig Charta on Sustainable European Cities from 2007. An update is warranted, as many relevant international and European agendas have been developed within the last decade. Further, the consequences of global challenges such as climate change, resource scarcity, digitization and migration become more and more visible – and are increasingly felt at the local level. The New Leipzig Charter (NLC) offers a snapshot of the common values within a European urban development policy and creates a legally non-binding framework to realise the targets set out in the Paris Agreement 2015, the New Urban Agenda, the 2030 Agenda or the EU Green Deal in cities.

The vision of the European city painted in the 11-pages-document, subtitled “the transformative power of cities for the common good”, rests on three thematic dimensions, three spatial dimensions, and five principles of how urban policy should be handled:

The just city guarantees social equality of opportunity, environmental justice and social participation for all, regardless of gender, socio-economic status, age and origin. The principle of “Leave No One Behind” acts as a guiding principle for this dimension. The green city adapts to the impacts of climate change and reduces emissions by promoting climate-neutral construction, the penetration of renewables across sectors, climate-friendly mobility and nature-based solutions. Polycentric settlement structures and a functionally mixed compact city of short distances define the model of European urban development. The productive city as an innovative and competitive business location is to be promoted in order to secure employment, to manage the shift to digital, service-oriented sectors and to guarantee local supply also in the area of urban nutrition. Next to these three thematic areas, digitization is identified as a cross-cutting issue with transformative potential.

The NLC underlines the importance of developing and implementing approaches towards transformation-oriented urban development with equal weight along three spatial levels: in the neighbourhood, in the municipality and within the functional space of a (metropolitan) region.

Finally, the document defines five principles of good urban governance, of which collaboration across government tiers can be found throughout the whole Charter and also in the accompanying document on its implementation. Next to it, there is the orientation towards public welfare and urban planning that is integrated, participatory (“co-creation”) and place-based.

Regarding cities as actors on climate change, the NLC particularly emphasizes the Green Deal’s goal of positioning Europe as the first climate-neutral continent. Compared to the previous Leipzig Charter, climate issues feature much more prominently in the NLC. Although the Leipzig Charter “on Sustainable Cities” of 2007 also calls for adaptation measures to climate change, a sustainable transport sector and more energy-efficient buildings to “reduce” CO2 emissions, the New Leipzig Charter goes even further and describes the “green city” in detail as a city with “climate-neutral” energy supply,

In addition, the NLC approaches the enormous dimension of the climate change challenge by underlining the necessity of deep urban “transformation“. Overall, the document serves as guideline for integrated urban development policy within the framework of the European value model and the common good, and asserts the importance of the nexus between climate action and cities as well as the necessity of collaborative approaches across levels of government for reaching common goals. 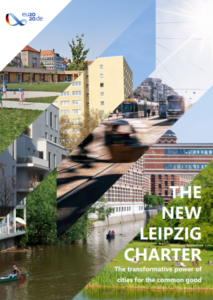