The 3rd Global Synthesis Report on Local Climate Action synthesises a wide range of themes regarding subnational climate action and provides a useful resource for practitioners and researchers alike. The synthesis revisits progress made by international initiatives and networks, climate action by cities during COVID-19, developments in multi-level climate governance as well as the localisation of SDGs.

The Covenant of Mayors for Climate and Energy has contributed to a significant progress in climate action on the subnational scale in the EU. The report indicates that over 1800 European cities, accounting for around 89 million inhabitants, have collectively managed to reduce GHG emissions by a quarter in the last decade. Additionally, the initiative has furthered adaptation planning as around 500 cities have adopted adaptation plans, albeit with differing scopes and implementation progresses.

Globally, over 900 subnational governments have made carbon neutrality commitments by October 2020, as the report highlights. Moreover, 617 cities have formulated objectives to reach 100% renewable energy. Commitments are however difficult to compare as timeframes and datapoints differ considerably. Hence, a “careful monitoring [will be] important to give credibility to these commitments”.

Drawing from the recently published Collaborative Climate Action Report, the ICCA2019 and further contributions by the PCCA, the report synthesises current developments in multi-level climate governance.

The need for – and the benefits of – multi-level climate governance is now widely recognised. However, the implementation of collaborative measures and systems could be further enhanced. Based on case studies in Germany, Canada and Brazil, the report concludes that few cities are the subject of national climate strategies, legislation and plans. Furthermore, the report finds a poor harmonisation of monitoring and evaluation methods and a lack of centralised information.

Regarding the current new or updated NDCs, the report finds that few NDCs integrate subnational climate action in a sufficient manner. Albeit there is a growing tendency to integrate cities and regions in adaptation planning, their potentials in mitigation are not yet reflected upon by the recent NDCs. 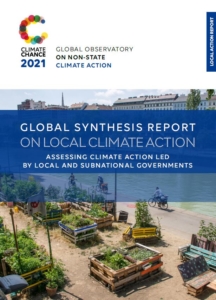