The new round of nationally determined contributions provides an opportunity for countries to work closer with subnational governments in order to enhance climate action. New NDCs also bring the possibility to institutionalise multi-level climate governance. This is especially apparent in Colombia, Peru and Kenya. Our analysis show that momentum is growing on collaborative climate action.

Local and regional governments are key to the implementation of national policies, not least when it comes to climate policy. Their importance is made clear in the Paris Agreement, where the engagement of all government levels in addressing climate change is recognised in the preamble. The goals of the Paris Agreement can only be achieved if subnational governments are involved in the nationally determined contributions (NDC). NDCs are the central feature of the Paris Agreement aiming to ensure a progressive sharpening of the national climate objectives through an update every five years. Hence, after the first round of intended NDCs (INDCs) in 2015 and 2016, over 70 countries have presented their new or updated submissions in 2020.

The new round of NDCs provide a promising opportunity to analyse the progress national governments have made on implementing instruments in the realm of collaborative climate action. Moreover, in light of the ongoing Covid-19 pandemic, the renewed plans presented in the NDCs can create synergies between economic recovery and climate action (Find out more about green recovery and its relation to the NDCs in our paper Recover green: Higher NDC-Ambition through Collaborative Climate Action).

Few NDCs published in the first round reflect the key role played by cities and regional governments and the leadership they demonstrate. A report by the Coalition for Urban Transitions (CUT, 2019) found that only 23 countries have an NDC that alludes to climate change mitigation in urban areas (Find out more about the CUT report here). However, many more countries have NDCs that refer to urban adaptation efforts and urban resilience.

The following analysis points out the progress countries have made in strengthening their NDCs through multi-level climate governance in the cases of Colombia, Peru and Kenya and their enhanced NDCs of 2020.

Click on the buttons below to find out about the country examples. 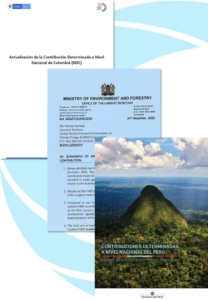 In its iNDC published in 2015, Colombia stressed the importance of subnational and multi-sectoral participation. The iNDC states its aims to reconcile bottom-up and top-down processes with an enhanced multi-level coordination and collaboration. Within its 2020 NDC update, Colombia has reinstated and institutionalised the multi-level, multi-stakeholder climate governance approach mentioned in its iNDC. Most measures in Colombia’s updated NDC are related to sustainable urban development and mobility, making the subnational level vital to its success.

Colombia’s primary mode of multi-level climate governance is its’ Sistema Nacional de Cambio Climático (SISCLIMA). SISCLIMA was established in 2016 and is responsible for coordinating Colombia’s climate action from the subnational to the supranational level. Through SISCLIMA, climate policy has been incorporated into territorial and sectoral planning instruments. Besides housing the Intersectoral Climate Change Commission, which is concerned with the financial management and foreign affairs, SISCLIMA also includes a platform for subnational actors – the Regional Nodes for Climate Change.

The Regional Nodes for Climate Change are the main network for Colombia’s subnational climate policy. The entity promotes, supports and accompanies the implementation of subnational climate strategies, based on thematic and geographic partnerships. On the other hand, municipalities are required by the climate change law to formulate climate change management plans which address both mitigation and adaptation actions. Aside of subnational government levels, the Regional Nodes can include civil society stakeholders, indigenous communities and academic institutions relevant to the region. (Learn more about the SISCLIMA and the Regional Nodes here.)

Peru’s NDC system relies heavily on multi-level, multi-sectoral climate action. Already within its iNDC of 2016, it refers to a decentralised public consultation processes which was held to receive input for the formulation and review of the iNDC. In the implementation process, Peru used the cooperative channels and mechanisms created with the participatory consultation to ensure transparency and efficacy. This multi-stakeholder consultation was further institutionalised during the NDC update process.

“Dialoguemos sobre las NDC” (or “Let’s talk about the NDC”) is a participatory and diverse,  multi-level governance process which contributed to the NDC enhancement. The whole-of-society dialogue process was initiated by a first round of national-level consultations and a second round of subnational-level consultations, with stakeholders from local and regional governments, civil society and the private sector.

It has enabled knowledge exchange and has validated the search for financial resources in the implementation phase, both within Peru and with international organisations. Moreover, the dialogues have encouraged a broader representation and participation of non-state actors. The dialogues have also helped to identify the roles of the different stakeholders in the NDC measures, and thus to guide their involvement and participation in the process from the get-go (Find out more about Peru’s NDC dialogues here).

To organise and lead the dialogues (in addition to other multi-level climate governance mechanisms) Peru set up the “Grupo de Trabajo Multisectoral” (GTM), through its national framework law on climate change (LMCC). The GTM consists of almost all of Peru’s national ministries, subnational governments and non-state actors, encouraging the involvement of a wide array of societal actors within the drafting and implementation process of its NDC.

Similar to Peru’s NDC Dialogues, the GTM is considered a good practice in collaborative climate action. Through a high-level representation at the beginning of the process and the continuation of technical expert assigned to each sectoral ministry, the GTM secured political buy in. Additionally, it fostered inter-sectoral cooperation on climate action and joint learning processes throughout the 13 involved sectoral ministries. Lastly, in reaching out to the private sector and international organisations, the GTM ensured a wide engagement of various stakeholders in the NDC update and implementation phase.

While the first Kenyan NDC and the according Climate Change Act (2016) laid out the foundation for the inclusion of diverse stakeholders, among them the subnational county level, the updated NDC reflects a more in-depth inclusion of multi-level climate governance mechanisms. Within the process of drafting and updating its NDC, Kenya was able to use the multi-level governance system already in place not only in climate matters. The country is characterised by its devolved cooperative governance system, where county governments are not necessarily subordinate to the national government.

As such, National Climate Change Action Plans (NCCAP) prescribe measures and mechanisms for climate action. The NCCAPs mainstream climate change into national, sectoral and subnational development planning, and like the NDC itself are updated every five years. The Kenyan Climate Change Directorate oversees their implementation and lends support and technical assistance on coordinating the implementation of the plans, on reporting and on capacity building at county level. Climate change adaptation is to be mainstreamed into integrated county development plans. At the subnational level, counties are to establish so-called Climate Change Units (CCU), which coordinate county-level climate change action.

Within the NDC revision process, Kenya assembled a broad coalition of stakeholders, from different governmental levels, civil society, academia and the private sector. The country’s aim was to further facilitate stakeholder ownership to ease the implementation of the updated NDC and communicate effectively.

With regard to monitoring, reporting and verification, Kenya aims to establish an integrated system with inputs from both the national and the county level, where counties are to downscale and contextualise indicators into their planning. Further, counties are responsible for preparing county sectoral plans. This shows how, while targets and systems are prescribed by the national government level, the counties demonstrate ownership for MRV which creates ownership of climate change actions.

Kenya’s updated NDC shows how countries can build upon existing multi-level (climate) governance system to further elaborate collaborative climate action and raise ambition. The country has successfully applied its collaborative governance mechanisms within the NDC revision process, its implementation process and in monitoring, reporting and verification.