The UNFCCC’s synthesis of the recently submitted NDCs demonstrates that current commitments are not enough to limit global temperature rise to 1.5°C. The report can be regarded as a warning sign for parties to step up on – and deliver – on a more ambitious climate action.

The ‘NDC Synthesis Report’, published in February 2021 by the UNFCCC Secretariat summarises the new round of Nationally Determined Contributions (NDCs). It synthesises 48 new or updated NDCs, representing 75 parties which accounted for 28.8% of global GHG emissions in 2017.

The report indicates that the submitted NDCs merely achieve a collective emissions reduction of 1 per cent in 2030, with 2010 as the base level. Parties must hence increase their efforts and submit stronger, more ambitious NDCs to reduce global temperature rise.

In total, 43 countries have submitted stronger NDCs. Colombia, Peru and Kenya, have, amongst others, increased their respective GHG reduction targets. The three countries provide an insightful case at which to examine Multilevel Climate Governance systems, as the analysis of their NDCs has shown. (Find out more about subnational and collaborative climate action in these countries here). Regarding subnational climate action, the report shows that adaptation remains a key area of action for urban and regional governments. Urban areas and other human habitats are included in 54% of the NDCs which have adaptation components (39 out of 48).

Due to the ongoing COVID-19 pandemic, many NDC submissions were delayed. Major emitters which have a decisive effect on the scope and ambition of global climate action, such as the United States, China and Japan have not yet submitted their NDCs. A final synthesis including forthcoming NDC submissions, will be published ahead of COP26 in Glasgow later this year.

The NDC Synthesis Report can be viewed as a warning signal for countries to step up and deliver a more ambitious and effective climate action. It however also provides an opportunity for countries which have not yet submitted their NDCs to raise ambitions and include all relevant societal actors and governmental levels in their submissions. 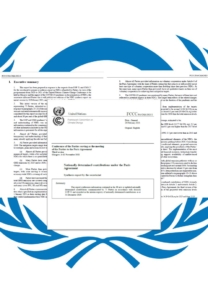